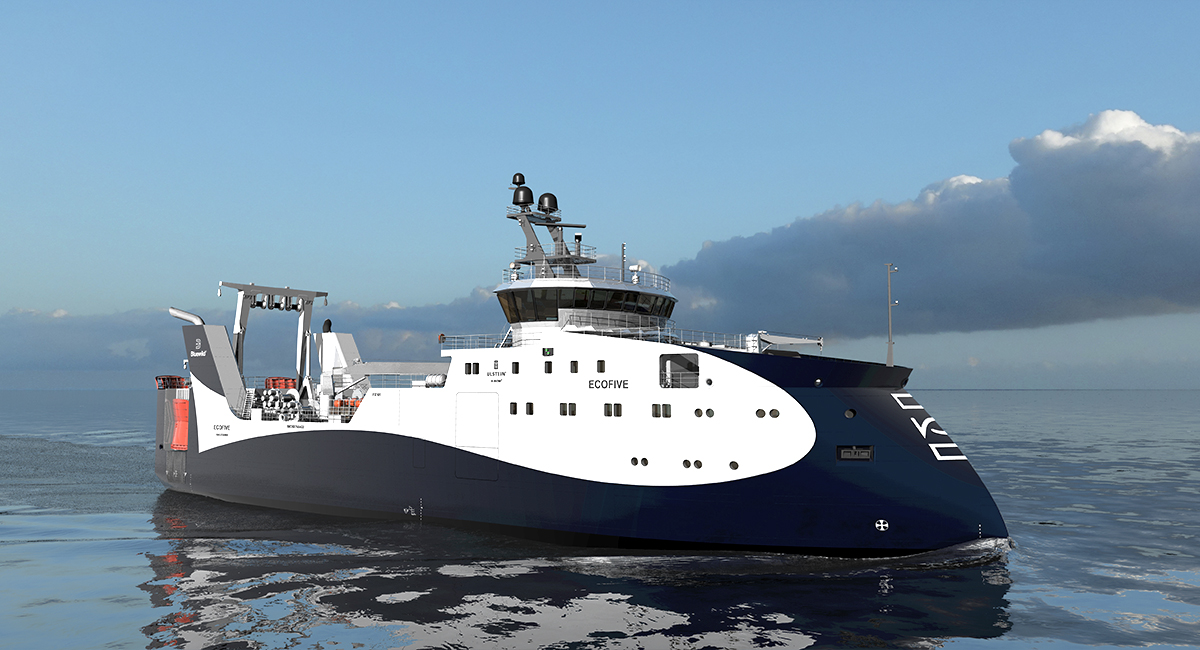 Jury: — ECOFIVE marks a shift for the fishing industry

ECOFIVE stands for “Eco-Friendly Fishing Vessel” and should provide a significantly reduced environmental footprint, improved fish quality and a safer working environment. A very fuel-efficient propulsion system and a revolutionary solution for hauling fish on board are just two of the innovations on the new vessel.

For the development of the vessel, the shipowner Bluewild AS and the design company Ulstein Design & Solutions AS have been nominated for this year’s Innovation Award, which is awarded during Nor-Fishing 2022.

— Both companies are very proud that ECOFIVE has been nominated for the Innovation Award. It means a lot to be recognized for the time and effort we’ve invested in moving the industry forward. With ECOFIVE, we’ve come up with a new overall concept for factory trawlers, which, among other things, has exciting innovations in a fuel-efficient hybrid propulsion system and a revolutionary solution for hauling fish on board, says Tore Roaldsnes, CEO of Bluewild.

Bluewild AS and Ulstein Design & Solutions AS are not exhibitors at this year’s Nor-Fishing, but will be present to participate in seminars, presentations, and panel debates – and to meet old and new customers. Book your meeting ahead of the fair:

The systems that secured the nomination were developed by the fishing company Bluewild, in close cooperation with the design company Ulstein Design & Solutions AS. The new vessel’s purpose is clear:

— We bring the creation of value and resources home to Norway. Everything we catch is utilized, and of such quality that it’s fit for human consumption. From holding tanks, whilst still alive, the fish are sent to the factory, where, after electro-stunning, bleeding, and further cooling, they are collected in buffer tanks according to size and species. Then, each size and species are further processed and ends up as different products; fillet, head, skin, oil – everything is used, explains Roaldsnes.

The Norwegian shipyard Westcon Yards in Ølen has started construction of the vessel, with an expected delivery at the beginning of 2024.

Over the years, Roaldsnes has envisioned a completely new solution for hauling fish. Alongside Ulstein Design & Solutions AS and Ecotec, an equipment manufacturer, the idea is now becoming reality.

— ECOFIVE’s new handling system for the trawl guides the catch into a water-filled reception area below the waterline. The fish doesn’t leave the water, which reduces the physical stress associated with hauling the trawl onto deck, over the trawl slip, and emptying it into reception bins.

Roaldsnes’ years of thinking has yielded results, because the advantages of the new solutions are plenty.

— There are quite a few positives, but the most important ones are higher fish quality and safer workspace on deck. If this works as intended, it will help revolutionize the industry, says Roaldsnes.

Designed for the lowest possible emissions

The new trawler can also boast an efficient hybrid system with two propellers, capable of combining battery propulsion with both diesel-electric and diesel-mechanical propulsion. This makes the fishing vessel very fuel efficient.

— Through analyses and tank tests, we estimate that the hybrid system, in combination with the vessel’s other energy-saving measures, will provide at least a 25 % reduction in fuel consumption and emissions, compared to a corresponding modern trawler that operates this type of combination fishing. Whilst doing some operations, the savings can exceed 40 %, says Roaldsnes proudly.

Secretary of the jury for the Innovation Award, Odd Berg, is impressed by the overall innovation that has gone into the new vessel.

— ECOFIVE marks a shift for the fishing industry! The vessel is the result of solid long-term innovation work, and we hope they succeed.

The jury secretary says there are many small innovations that altogether makes ECOFIVE an exciting vessel.

— The hybrid propulsion system and the trawl and its construction constitute the main elements of the innovation. The jury also mentions storing the catch alive in water tanks on board, before transporting it in suitable quantities to the factory as an important element. Personally, as a former ship engineer, I took special interest in the propeller system whilst reviewing the application, concludes Berg.