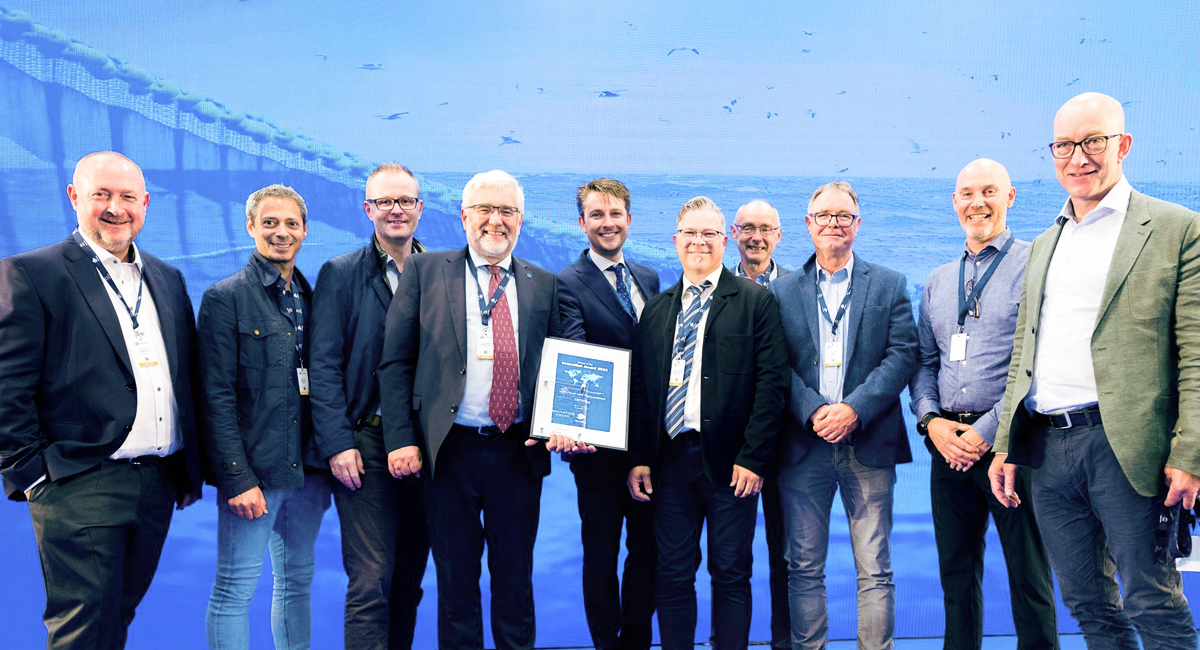 Winners of the Nor-Fishing Foundation Innovation Award 2022: Bluewild AS and Ulstein Design & Solutions

During the opening of Nor-Fishing 2022, Erwin Jager from Ulstein Design & Solutions AS and Tore Roaldsnes from Bluewild AS could receive this year’s Innovation Award for the vessel ECOFIVE. They see the award as great recognition and important attention for the ground-breaking project.

“Many people have worked for a long time to get to where we are now. Getting this recognition at the end phase of the project is a relief and a confirmation that the industry sees the value of the work we have done, says Tore Roaldsnes, CEO of Bluewild AS, as he comes off the stage.

Built the vessel from scratch – started with blank sheets

Erwin Jager, Sales Manager at Ulstein Design & Solutions AS, says that they started with completely blank sheets when they started the process behind ECOFIVE.

“We configured from scratch what an efficient, sustainable and safe fishing vessel should be – and then we built piece by piece. It has been a long and demanding process – but also very rewarding and exciting, says Jager.

“We are now looking forward to an exciting exhibition – where the goal is to gather new inspiration for further innovation,” concludes Jager.

The jury, for its part, was impressed by the work of the innovative companies. Read the jury’s reasoning here:

Trawl handling consists of splitting the trawl on the trawl slip and leading the trawl bag with the fish into a water-filled catch reception area below the waterline of the vessel. The fish is thus under water all the time and not exposed to the same physical stress as when the trawl is pulled over the trawl slip and emptied into receiving bins. In the live fish tanks, water exchange, oxygen supply and temperature control are controlled. From the tanks, the fish is transported in stages to the upper production deck using positive pressure which minimizes damage to the fish. After bluing, the fish is run through cooling pipes which reduce the temperature of the fish. It improves bleeding and faster freezing. The freezer is powered by CO2 gas, which is a safe alternative and can provide temperatures down to minus 35 degrees and energy-efficient freezing.

The factory can produce fillets of whitefish, and cook and single-freeze prawns or raw prawns. All by-catch and residual raw material is taken care of.

The hybrid power and propulsion system, which combines the best features of diesel-electric and diesel-mechanical propulsion, is supported by a large battery pack. Two large propellers with rudder nozzles increase maneuverability and towing power, and help to minimize energy loss during rudder deflection. Excess energy, which is returned from the winches, is stored in the battery pack and excess heat from the engines is recovered and used where needed on the vessel.

Based on the operational profile of the boat, the propulsion system and system integration, fuel savings of at least 25% per kilogram of fish product produced compared to a conventional power system are estimated. In some operations, together with the other cost-saving measures on board, fuel savings can reach approx. 40%. This means significantly reduced fuel costs and a significant reduction in emissions of greenhouse gases.