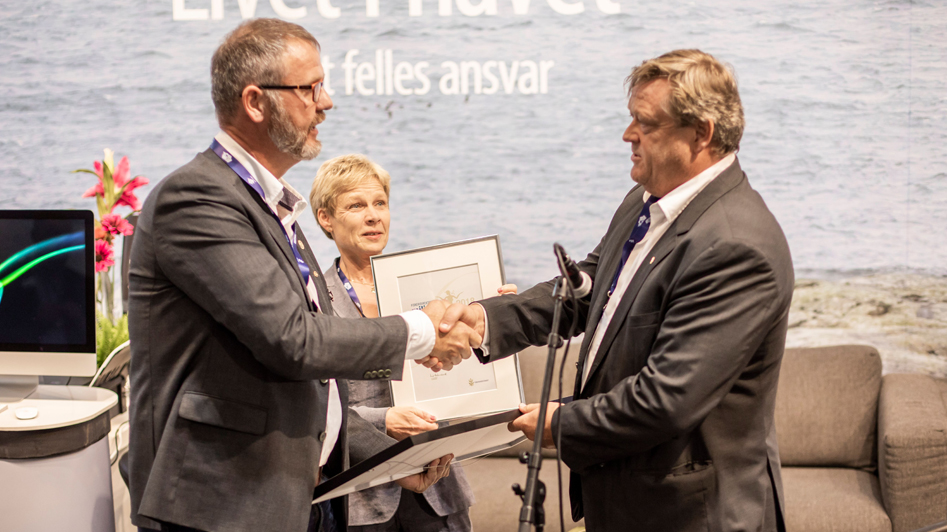 The winner of the Environmental Award 2018

Kenneth Bruvik was honored with the Environmental Award for his work with creating local, national and international attention around the issue of maritime littering and pollution.

Skipsrevyen interview both the Fisheries Director and the award winner (Norwegian):

The ceremony took place at Nor-Fishing, and Bruvik was presented with the award by Norwegian Minister of Fisheries Harald T. Nesvik and Fisheries Director Liv Holmefjord of the Norwegian Directorate of Fisheries.

Bruviks has shown great interest in maritime littering for over 20 years. Through his job at the Hunter and Fisher Society of Norway he has initiated and managed a project for youth that are having trouble adapting to ordinary schooling. Together with the kids he has been removing plastic waste from Norwegian beaches and coves over many years.
In addition to this, Kenneth Bruvik has been a clear and loud voice after a whale was found with a stomach full of plastics on a Norwegian beach in January 2017. He has made sure maritime littering is on the agenda of both news agencies and politicians.

In a press release from the Directory of Fisheries, Fisheries Director Liv Holmefjord says maritime pollution is an increasing threat to all life in the ocean. – The engagement this year’s winner has shown and upheld over time has given us faith that our work is worthwhile – and that we can turn around the destructive trend – and thereby reduce and remove pollution in the sea and along the coast.

In the press release the Directory of Fisheries write that Bruvik has organized many cooperations across many levels and starting points, and has been central in creating a international engagement to reduce maritime pollution.

Kenneth Bruvik has also been host for several TV-shows and is a popular speaker for events.